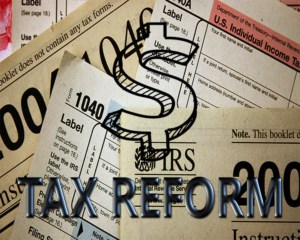 With the GOP’s attempts to repeal and replace Obamacare on semi-permanent hold until further notice, Capitol Hill has another chance to try and fulfill a major Trump campaign promise before 2018 hits – It’s Tax Reform! For the Republican majority in both houses of Congress, this issue really is a must win for them. Both houses desperately need to be able to gain back some of the faith they have lost from the voters, after a mostly ineffectual first six months of President Trump’s first term. For small business owners who feel that the federal government has an unfair stranglehold on their livelihoods, tax relief and major tax reform are way overdue. According to an April CNBC/SurveyMonkey Small Business Survey, one in four small business owners stated that high taxation is one of the most important business issues facing them today. Why are taxes such a big deal to America’s entrepreneurs? Taxes have a direct effect on a business’s profits, cost effectiveness, and ability to compete with its competition. Higher taxes also cut into employee training resources in a tight job market, and they stifle a business’s future goals of expansion, which in turn, adversely affect the local economy. This is why tax reform won’t just be a big win for the White House and the GOP, but also the average small business owner in a big overdue way.

President Trump’s tax proposals are actually just a brief document outlining basic potential tax concepts, certainly not a vote-able plan for either the House or the Senate as it stands at the moment.  This obvious fact has helped to further frustrate small business owners who are growing impatient with the slow pace of progress on their behalf in Washington DC.

Trump’s tax reform outline calls for a simplification of the current tax code through reducing the tax brackets to four categories instead of seven. The president’s proposal would reduce the tax rate that’s currently paid by freelancers, sole proprietors, and unincorporated small businesses to 15%. This “plan” will reduce tax rates, but it also reduces tax deductions as well.

At the current tax rate, small business owners pay as much in income taxes as someone working in a 9 to 5 job for someone else. What kills small business owners’ financially though, is paying out their employee’s portion of payroll taxes to cover Medicare and Social Security. A reduction in small business tax rates would also help compensate for those costs.

Corporate tax reform, is, of course, going to be another longshot for the GOP. It will certainly not be a quick and easy endeavor for “The Hill.” Personal taxes on the other-hand, which is what most small business owner’s pay under self-employment rates, will be much easier to both craft a bill that’s sign-able in both Houses on “the Hill,” and will also appease the growingly angry overtaxed-feeling voter.

What further fuels the small business owner’s hopes of actually seeing tax relief legislation passed this year, is the GOP’s fears of what could happen in the 2018 midterm elections if they fail to come through on another major agenda item. The GOP is truly desperate for a publically perceived win by then, pushing healthcare out of the way for a much surer political victory.

Some businesses actually oppose proposed tax reforms, such as businesses in the realty market. Part of the Republican led tax proposal includes eliminating most of the existing tax write-offs and making the standard allowable deduction larger.

Realtor’s fear that by eliminating certain tax write-offs for homeowners, it will cause the housing market to slump rather than to continue to grow, citing some proposed changes in the tax code as harmful to the industry, like totally eliminating mortgage interest deductions.

Bush era tax cuts ran out in 2013, and since then, many small business owners have continued to feel the pinch, leaving some small businesses with less annual money and resources for modern innovations and upgrades, or to reinvest in their businesses. This has left small business falling behind in a progressively recovering economy, making the issue of tax reform a challenging but vital undertaking for lawmakers hoping to strengthen the American economy.

Both President Trump and the GOP have their proverbial butts on the line when it comes to their next legislative endeavor of tax reform, at least as far as the general public is concerned. This bodes well for small business hopes for productive legislation, rather than more political stalemates at the expense of the nation’s citizenry. Odds are, tough political lessons were learned and acknowledged by both parties over the health care debacle. Tax reform is an issue that many people of all walks of life, income brackets, and political parties can unanimously concede needs to be tackled this year.  If our elected officials want to still be elected again in 2018 and beyond, “The Hill” better get back to work on finding a compromise this time that not only they can all agree upon, but that all our citizens, small business owners, and major corporations can finally welcome as making America not just “Great” again, but also profitable again for the nation’s struggling working class.

Looking to install a garage door or security gate at your New York City based small business? Get in touch with New York Gates at 718-614-0616. They are the top professionals in the industry with the best guarantees available.