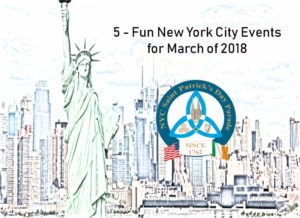 The bitter cold of our New York City Winter is gradually starting to warm up in the pre-spring air, much to all of our collective relief. The streets of the city once again call to us at the beginning of March as the temperature starts to rise and the promise of another glorious New York summer patiently waits around the bend in a few short months. Now is not the time to wait for April’s blooming spring in order to enjoy all of the great annual events, shows, and festivities that the Big Apple has to offer – Get out there now and get a head start on the Fun! Here are five great things to do in NYC as the sun shyly starts to come back out.

Woman’s History Month is from March 1st through March 31st and New York City is happy to honor all the wonderful women of America that make all of our lives so much better. The theme of the month will be highlighting all of the past and present accomplishments and incredible things that our nation’s women have done for not only New York City, but also the nation and the entire World. Congress declared the month of March National Women’s History Month in 1987.

Nasty Women of the Metropolitan Museum: (Forgive the Name – Their Idea!)

One great visual way to appreciate America’s strong women from March 3rd to July 7th is to take an art tour at the Metropolitan Museum of Art which showcases some of the most feared, loved, ingenious, foolish, and terrible-though-admired women of history. The tour is two hours long and covers such powerful World renowned females in charge such as one of the most powerful women pharaohs of ancient Egypt, the first official Roman Empress, notable historic women scientists, and of course, women painters who focus their artwork on the lives of strong women.

During March 1st, 8th, 15th, from 4 PM to 9 PM the Five Boroughs of New York City will spar off over who makes the best beer in the Best Brews of NYC. You can buy a flight of five local brewery samples in the Winter Garden at Brookfield Place and then vote for your favorite to help decide which beer will win the coveted title of Best Brews of NYC People’s Choice winner.  A panel of notable local beer connoisseurs featuring Anne Becerra and Jos Bernstein among others will judge the final Juror’s Choice winner.

The MC of the final Best Brews of NYC event will be beverage expert Ethan Fixell who writes for well-known and prestigious publications such as Food & Wine and Tasting Table. He also teaches beer, wine and spirit classes in the New York City area. All beer sales will be donated to New Yorkers for Parks which promotes parks and open-space access throughout New York City.

The Best Brews of NYC is free to enter and is a 21 and over event.

From March 3rd to April 22nd New York City’s living museum, historic local landmark, and plant research and conservation organization all rolled up into one will once again be showing off their remarkable and practically endless displays of luscious orchids. Founded in 1891, the New York Botanical Garden is one of the most distinguished, renowned, and largest botanical gardens of its kind in the United States.

Daniel Ost is a popular Belgian floral artist and well-known World expert on creating stunning large-scale artworks using living and cut flowers as his canvas. He has done another remarkable job this year bringing his magnificent floral works to New York City’s Botanical Garden patrons.  The show is now in its 16th year and The Orchid Show highlights thousands of carefully placed spectacular orchid installations and living sculptures that are sure to renew the spring spirit in all who attend it.

One great way to truly say goodbye to winter is to get in one last New York City Winter Wine Festival. On March 10th at the PlayStation Theatre in Times Square, during sessions from 3:00 PM to 6:00 PM and 8:00 PM to 11:00 PM a huge selection of hundreds of extensive wines from both New York State and around the World (France, Italy, Spain, South Africa, New Zealand, Australia, Chile, Argentina, Portugal, Japan, Austria and Germany) will be offered for tasting along with delicious gourmet food and entertaining music.

A 15% group discount is offered for 10 or more people. tickets include…

March 17th is the day that New York City shows its Irish roots again as The NYC St. Patrick’s Day Parade marches up 5th Avenue to then be reviewed from the venerable steps of Saint Patrick’s Cathedral. Since 1762 when homesick Irish Military members serving the British Army heroically wore the green swatch banned in their homeland and defiantly marched down the New York City streets singing Irish folk songs, speaking their native dialect and playing Irish pipes in a revelry of then forbidden Irish Pride.

Start Time: 11:00 AM
End Time: 4:30 PM
Parade Route: Begins at 5th Avenue at 44th Street and ends on 5th Avenue uptown at 79th Street.
Warnings: There are no portable toilets along the parade route. Large bags are not allowed in the grandstands. Pets are not allowed with marchers. Spectators should show up early and dress warmly. Be ready to endure some security protocols.