Google Rating
4.6
Based on 30 reviews 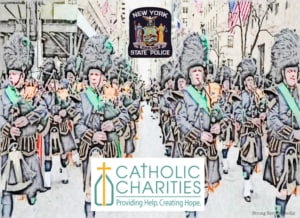 With Saint Patrick’s Day coming up again just around the bend, it’s time to start thinking about what your plans are going to be with so many Irish oriented festivities to choose from, along with viewing the prestigiously old and traditional – New York City Saint Patrick’s Day Parade. On March 17th the annual parade event will start at 11: AM in order to honor the Patron Saint of Ireland and the Archdiocese of New York. The parade route will go up Fifth Avenue starting at East 44th Street and ends at East 79th street. For those of you out there who don’t know the historic details of New York City’s most popular social street event; it goes like this.

The Beginning of Something Big
The initial and official NYC St. Patrick’s Day Parade, happened way back in 1762 when Irish members of the British military and Irish ex-patriots who were stationed in the colonies of New York, got together one day and marched in New York City. Little did they know that the yearly tradition would grow into the mammoth festivity it is today. The event draws over 2,000,000 spectators, an equally impressive number of participants also march in the parade – to the staggering tune of hundreds of thousands. The parade will be streaming on NBCNewYork.com and is also live streamed on NYCStPatricksParade.org as well.

The NYC Parade has been around since before the signing of the Declaration of Independence. Wearing green was a sign of Irish pride, but it was ironically banned in Ireland for political reasons. So the first New York City Saint Patrick’s Day Parade in 1762 was actually in fact, a sort of a harmless rebellious expression of the Irish lifestyle, which many Irish at the time felt was being unfairly denied them, both in Ireland and in the American colonies. IE: To march, to speak their native tongue aloud and proud, sing Irish songs in public, and play the pipes for Irish ears. In the old days the parade went past the Old Saint Patrick’s Cathedral, known as the Basilica. The modern route now ends at East 79th Street.

After that first parade of Irish soldiers took to the streets in order to show their solidarity for all things Irish, the parade was continued every year and sponsored by the military units stationed around the area. After the War of 1812, Irish fraternal and beneficial societies took over the hosting and sponsoring duties of the ongoing yearly Irish military parade event. In 1851, the 69th Regiment began to lead the parade marches, and still leads it till-this-day.

Those Honored this Year
This year’s Saint Patrick’s Parade is dedicated to the 100 years of fine service to the Public that the New York State Police has provided. Catholic Charities of the Archdiocese of New York will also be honored for all the fine work that they do for the New York State community. The two agencies coincidentally both turned one hundred years old in 2017.

The New York State Police force employs more than 5,800 officers and civilian employees. Its superintendent is George P. Beach II. The Police agency has been protecting New York citizens and its visitors since 1917.

Catholic Charities is a federation of around 90 different agencies located throughout New York City and ten state counties. The charitable organization works with both Catholics and Non-Catholics alike, with programs that help children, provide family crisis services, feed and assist the homeless, work with the physically, mentally, and emotionally challenged, along with many other charitable services.

The Grand Officiator This year’s ST. Paddy’s Day Grand Marshal spot has been handed to President and Chief Executive Officer of Northwell Health, Michael J. Dowling. Northwell Health is one of the largest integrated New York Health systems that have 62,000 employees. The health system runs 21 hospitals that provide 6,675 hospital beds to patients from all around New York State. The Executive Director of Catholic Charities of the Archdiocese of New York has also been named as Aide-at-Large to Mr. Dowling.

According to IrishCentral.com Mr. Dowling stated that, “I am proud to follow in the footsteps of so many remarkable luminaries as we again celebrate the very best of Irish and Irish American history, culture and heritage.”

Make sure that before this Saint Patrick’s Day, you’ve also prepared your security measures for a night that’s often fueled by big crowds drinking large amounts of alcohol. The New York Gates company is professional, fast, and efficient when it comes to security screenings and recommendations, plus expert maintenance and repairs. They also have a 24/7 Emergency Service that can come in extremely handy if anything happens to your security gates or garage doors in the middle of the night. Call Them Today at (718)-614-0616 or Contact Them Online in order to make sure that you’re prepared for this coming Saint Patrick’s Day.

Saint Patrick’s Day after the Parade

Huge Annual New York Pub-Crawl: You can hit the bar anytime in New York City, but on Saint Patrick’s Day, there’s one of the biggest and most infamous N.Y.C. Pub Crawls happening in the World.