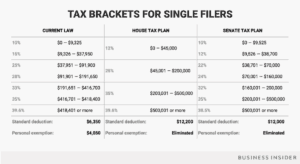 The recent procedural victory by the G.O.P. on tax reform at the end of last November, has, of course, received some mixed reviews from both the public sector and the business sectors. According to a November Reuter poll, only a third of Americans supported the tax plan. In the latest polls, the tax plans approval rating is still at a dismal 34%. Those polled, overwhelmingly stated that they believed the tax cut would not actually benefit the middle class as it claims. This is where social perception can adversely affect small businesses bottom line. Money stressed, middle-class families, drastically spend less of their disposable incomes at small businesses if they’re uncertain about their financial futures, as we, unfortunately, all saw during the great recession. The current version of the tax bill has given conservatives renewed hope for a win before the new year comes. But, so many amendments were stuffed into the bill in the last hours before its vote that it makes it somewhat difficult to assess the full bill as of yet, at least not until the experts have time to break the bill down for the general public. Here are some important specifics about the proposed tax cut plan that will help point out some pertinent facts today about how the new tax legislation might affect your small business in the future.

Under the new tax plan, small business owners would face a 70/30 rule, that is, 70% of their income from the business would be treated like employees, taxing the income to rates up to 39.6%. This would make only 30% of that income eligible for the 25% preferential rate. Professional services firms would be taxed at 100% of the owner’s income as a salary, which would also be taxable up to the 39.6%.

In 2018, an average small business owner’s ability to write off capital expenses will likely be non-existent for businesses who bring in less than $250,000 a year. The “Pass-Thru” tax rate which applies to sole-proprietorships, partnerships and S-Corporations will most likely be capped at 25%. This is what fuels the perception by many small business owners that they have been left behind in order to totally cater to big business and their new proposed 20% tax rate.

Small businesses will get a break under the new plan when they get to file planned deductions on portions of their income which passes through on their individual tax returns at the rate of 23%.  The tax provision would be held in place until the end of 2025.

In industries where employees are allowed to deduct their work expenses, employees will also be feeling left behind under the new tax plan. All of those current work deductions would most likely be eliminated in 2018.  If these proposed changes make the final vote as is, for employees, losing reimbursement expenses relating to their job will negatively affect them in a very dramatic and unpopular way.

Paying out union dues, educational workshops related to work, plus much more will all end up with the employee eating the full cost next year. This may not sound like an employer problem, but, when employees start spending too much money just to come to work every day, they just might decide to work somewhere else that’s a little more cost effective to their financial needs.

Small business owners and self-employed filers who are able to file on a simple 1040 Schedule C  Profit or Loss form, would still be able to declare their basic business expenses with the proposed tax plan. The big question of exactly what extra benefits small businesses will receive in the new tax plan still remains murky and hard to foresee as the tax plan returns back to the Senate.

The big issue that has been plaguing small business for years has been trying to avoid being taxed like a big business. In the upcoming tax break scenario as it stands now, once the bill comes back from the house the “Big Elephant” in the room is going to be the huge tax cut for big business, which drops their tax rate down to 20%.

Since most small businesses don’t file as corporate, this huge tax break for corporations will not benefit most small businesses. The new tax plan does give hope that more allowances will be given for writing off new business equipment over a five year period. Businesses will then retain a portion of the plan’s write-offs for a few years after that.

There are a few true benefits to be had for small businesses in this new tax bill. At least something better than what was offered them before.  Big hitters like the National Federation of Independent Business, tough, which is largely perceived as a conservative group has as yet to endorse the new tax plan, citing strong reservations about where the plan will leave small businesses. Deductions on the federal level for taxes that are paid out to state and local governmental agencies will also be a thing of the past in the new tax plan. This is another downside of the plan that has both homeowners and small business owners worried.  The most important voice a small business owner will have in 2017 and beyond is the one that is not afraid speak up, who goes out and gets involved, and who contacts both their local business groups and their governmental representatives and lets them emphatically know all of their small business concerns. This is the only way to ensure that Washington D.C. won’t once again leave America’s small business owners behind in 2018

Get in touch with New York Gates today at 718-614-0616, they’re the top professional gate and garage door manufacturers, installers, and repair specialists in the five boroughs.
E-mail them at [email protected] with your project specifics and NYG will quickly reply back to you with detailed answers to your questions.