Google Rating
4.6
Based on 31 reviews

Will Foresman
17:32 30 Mar 20
Benny at New York Gates was terrific -Super quick, efficient and affordable service. Same-day emergency and couldn't have made service any easier.Thank you!WILL 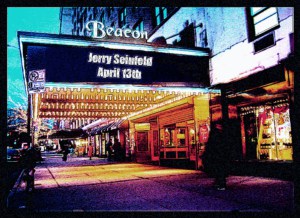 For all of those Jerry Seinfeld fans out there that missed the comedy genius on March 16th, fret not, you will get another chance at seeing Jerry again at the Beacon Theater on April 13th, with showings at 7 pm and 9:30 pm. Jerry Seinfeld was born Jerome Allen Seinfeld AKA, “Jerry” in 1954. This very prominent comedian, actor, writer, producer and director is best known for his hugely popular sitcom Seinfeld. The TV mega-hit was fictionalized to portray Jerry’s life in a show purported to be about absolutely nothing. Seinfeld created the show in 1988 for NBC, and it was actually to be named The Seinfeld Chronicles; but confusions with a short-lived show at the time called, The Marshall Chronicles, made them change the name to The Seinfeld Show instead. The final episode of Seinfeld aired in 1998, but, as anyone who has a television set knows, Jerry’s reruns will likely live on for untold more decades to come.

After Seinfeld’s last season ended, Jerry Seinfeld returned to New York City from L.A. in order to further pursue his stand-up comedian ambitions after years of television acting. He has been doing just that with his monthly shows at the Beacon Theater, which so far, are scheduled all the way through to December.

With such a lengthy booking date, it’s obvious that both Seinfeld and the theater owners are very optimistic about the shows continual success. Especially, given Jerry Seinfeld’s past successes in recent hit projects like Crackle’s popular, Comedians in Cars Getting Coffee, which is a web series talk show that was created, directed, and hosted by Seinfeld.

Ticket prices to see Jerry Seinfeld at the Beacon are not exactly cheap, though, starting at $114, and topping out at a whopping $1,188.00. Not exactly a first choice for a first date, unless of course, you can absolutely afford it. In Seinfeld’s defense, seeing a live theater show in New York City, especially on Broadway, is never exactly a cheap affair.

Jerry Seinfeld is a big attraction with an even bigger name and reputation; therefore, the big box-office ticket prices are not that shocking. It should also be no surprise then that Seinfeld’s net worth is an incredible 870 million dollars, according to the website CelebrityNetWorth.com. In 2007, Seinfeld had another great success when he co-wrote and used his unmistakable voice in DreamWorks Pictures’ The Bee Movie.

Forbes magazine listed Jerry Seinfeld as the number one highest paid comedians for 2015, making him a perfect candidate for another big New York City comeback at the Beacon. In the almost two decades since the end of the Seinfeld show Jerry has settled down and in 1999 married American author and philanthropist, Jessica Sklar; they have three children, Sascha, Shepherd, and Julian.

When asked in a 2014 Washington Post article, “How do you stay an outsider after success, marriage, and kids?” Seinfeld stated that he has stuck with the same friends for 35 years; he doesn’t do things much differently in his life, outside of the obvious material aspects of being rich and famous. Jerry said he still hangs out with other comedians and constantly works on his routine, living what he calls a comparatively normal life as far as his family, friends, and lifestyle are concerned.

Of course, some things change over the years, some for the better, and some for the worse. If you’re looking for a modern and revised version of Jerry Seinfeld’s routine, you may be sadly disappointed. For those of you looking for the Jerry that did his standup routine on the Seinfeld Show, but just a lot older looking – you definitely won’t be disappointed.

Jerry Seinfeld still sticks to his classic complaining style about the absurdities of being in relationships, average little daily things, and American society in general in all of it, and his, funny little idiosyncrasies. Just like the show that he started so many years ago, Seinfeld himself is just as timeless and well worth seeing for the guaranteed laughs he brings.

The Seinfeld show received 10 Emmy awards and 3 Golden Globe awards over its nine season run. Jerry shared the popular Hollywood limelight with his other notable cast-mates of zany characters, such as Julia Louis-Dreyfus as Elaine Benes, Jerry’s ex-girlfriend – The infamous Michael Richards as Kramer, the mooching next door neighbor – Jason Alexander as the overly neurotic George Costanza, whose father on the show, Frank Costanza, was played by actor Ben Stiller’s real life father and TV acting veteran, Jerry Stiller. Seinfeld was reported to have turned down a $5 million dollar per episode offer by NBC, just to stay on one more year for a tenth season of the extremely popular show.

The New York Gates Company is a strong believer in community ties, and also in the freedom of artistic comedic expression. NYG is the top professionals in their industry; where businesses from every walk-of-life can depend on them twenty-four hours a day, every day. Call on them whenever you have security gate problems, or if you’re looking to install something new – or, if you just need some expert maintenance on your current commercial or residential garage doors. Contact Us Online, or Call Us directly at 718-614-0616.