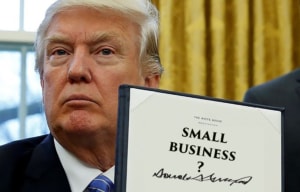 Trump’s presidency is reaching its first six-month mark. The President has had his victories and also his major setbacks in that short period of time. Between the Russian scandal, North Korea, and Obamacare, not to mention the Syria dilemma being thrown into the mix again, President Trump’s campaign promises to small business owners have somewhat taken a back seat; both in the media and politically. Here are some insights into what the future may hold for small businesses in America under the newly elected Trump administration.

What Small Businesses Expect from a Trump Presidency:

One of President Trump’s first executive orders was to repeal two existing regulations for every new one emplaced. The seemingly endless government regulations that both big businesses and small ones alike have to jump through are widely considered to be stifling America’s economic growth, thus, costing the working class public its much-needed jobs.

This first move by Trump at deregulating the federal government is also widely viewed by big business as a big breakthrough – Giving them hope of once again regaining profitability when manufacturing actual products in the United States. Unfortunately, for the small business owner, the main obstacles and expenses that they face have come from the numerous state and local regulations involved – Not from the federal level.

Trump has also promised that he will lower corporate taxes from 35% to 15%, basically reducing them over half the previous rate. Once again, for the small business, this is not much of an improvement considering that most small business owners file their business taxes on their own personal taxes, incorporated or not, making that potential tax break mute for many who file that way. One must also reduce income taxes as well for the plan to truly benefit the small business community. This is something that’s unlikely to happen though in the near future, for either the average American taxpayer or the average small business owner.

Trump’s tough talk on our Mexican and Chinese trade deficits during his campaign trial tended to spook small business owners that depend on both of those foreign markets for much of their business trade. When Donald Trump the Billionaire won the U.S. presidency against what was thought to be staggering odds, big business saw a new opportunity to court one of their own in the Whitehouse; while small businesses and start-up entrepreneurs still wondered if they would actually be let into Trump’s publicly perceived exclusive 1% club.

With Trump’s efforts to scrap NAFTA (North American Free Trade Agreement), business perceptions of the President’s plan have been mixed and have also depended completely on the business’ situation on the world marketplace.

Obamacare or Not to Care, that is the Question

Once again, big businesses are the ones who have the most to gain by the total repeal of Obamacare, especially without any form of replacement. This frees big business from very costly federal regulations, stipulating what form of mandatory minimum health care coverage that a major company must provide for their numerous employees.

Big businesses tend to have to offer health insurance anyway along with decent competitive wages in order to bring in new innovative and well-trained employees into their company. Although small businesses would also get out of having to provide their employees’ with healthcare coverage if Obamacare was appealed, they would also lose substantial government subsidies. Small businesses need the benefit of being able to offer lower standard wages, but also being able to offer healthcare benefits to their employees as an incentive; making working for a small business more appealing to the average worker.

This is a tough one! History has clearly dictated that big business notoriously tries to squeeze out its competition, any competition, especially small businesses. Why would they really start helping small business growth now? Good question – They won’t without pressure from President Trump’s wealthy 1% friends at his request.

The impact of President Trump’s two executive orders championing women in business will still have to remain to be seen.  One thing that seems for certain, is that champions for the average small businesses owner still also remain somewhat lacking in Washington, DC, at least  as of yet. The troubles facing small businesses are still being drowned out by higher political priorities. Unfortunately, without big business using its giant influence in order to help promote small businesses nationwide, local economies will continue to be sluggish at best until something more is done to help.

A Wait and See Approach

Once all of the small business needs stated above are properly addressed by the Whitehouse, small business owners across the nation will still have to continue to speculate on what the new administration plans to continually do to stimulate local and state economies. Small business owners across the nation have recently shown a newfound feeling of hope that has taken over the general marketplace since President Trump’s inauguration – A hope that time and history has yet to confirm.

The New York Gate company constantly works with small businesses in order to offer them the highest quality cutting edge security gates, garage doors, mall grilles and shutters in the industry. They also provide expert installation, maintenance, repair, and bid assessments. Call them at (718) 614 – 0616 today, or use their convenient Contact Us online web page.