Google Rating
4.6
Based on 33 reviews 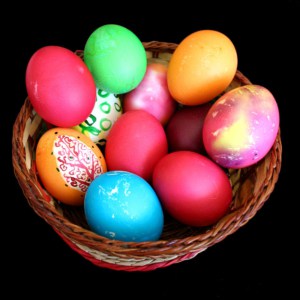 By Ikonact via Wikimedia Commons

Easter is commonly associated with children’s candy baskets, searching for eggs and prizes on grassy lawns, and youthful smiles and laughter on a sunny spring day. When people think of famous New York City yearly events, the Macy’s Thanksgiving Day Parade likely comes to mind, along with other seasonal events such as the Rockefeller Center Christmas Tree lighting. NYC has also been known for its nightlife and drinking orientated annual events, like Saint Patrick’s Day. But what is there to do on Easter in the Big Apple? The answer is “Lots of stuff.” Below is a list of several different entertaining things to do this April 16th in New York City.

Putting on your best Easter Bonnet

Every year in New York City the town gets out their best Easter bonnets and celebrates the traditional Easter Parade down Fifth Avenue between 49th and 57th street. The pageant dates all the way back to the late 1800’s. The parade starts on April 16th at 10 am and ends at 4 pm. Parade watchers show off their bonnets every year so don’t forget to bring yours as well. A well-known prime spot to watch the parade is in the area around the famous Saint Patrick’s Cathedral.

This classic style Italian café on 26th and Broadway is offering a set brunch menu of three courses for $40.00 per person. The meal starts with a choice between seven different appetizers, such as scallion cream cheese and smoked salmon on toast, or a catto plate of melted fontina, prosciutto, and chives. The restaurant is also offering its patrons a special insalata di scarole for the occasion. The next course is a choice between seven classic entrees, from old-fashioned steak and eggs to banana French toast. And to top it all off, there is a selection of five delicious Italian desserts to choose from.

For a more traditional brunch buffet, the Palm Court’s Executive Chef Michael Lockard and Executive Pastry Chef Matthew Lambie are putting on a classic and wonderfully decadent Easter brunch menu that won’t disappoint. Located at the luxurious Plaza Hotel, the brunch will start at 10 am on April 16th and end its service at 4:30 pm. Besides serving the popular Easter buffet favorites like eggs benedict, seared salmon, and brioche French toast; the Palm offers a delectable selection of carved meats such as a herb grilled rack of lamb w/ mint chimichurri sauce, and a bourbon and apricot glazed ham. An incredible array of desserts also awaits with dark chocolate and caramel sea salt éclair’s to name a few or some gianduja chocolate eggs.

This annual Easter event is geared towards the 10 and under crowd. It’s being held in Brooklyn this year at 224 Franklyn St, crossing Green St. The event is one of the most reasonably priced NYC egg hunts with a $15 per child entry fee. Eggs are filled with candy and trinkets that the little ones are sure to love. Pictures with the Big Rabbit are also available along with kid-friendly DJ’s playing popular hit tunes for happy frolicking tots.

This event in Harlem is a free event with less restrictive set timetables for “Hunt” entry. Waves of 15 children are allowed to participate in a “Hunt” every 15 minutes. Egg painting and arts and crafts are on a first come first serve basis. And of course, as tradition, photo ops are offered with the Easter Bunny. The event is located at 117th Street between First & Pleasant Aves and starts at 12 pm. It’s a family-friendly Easter event that is casual, convenient and both cheap and fun for all age’s.

New York Gates would like to wish everyone a happy Easter. We would also like to suggest some Spring Cleaning and Routine Maintenance checks on your Security Gates, Garage Doors, and Shop Shutters after a long hard winter. Call-Us-Today at (718) 614 – 0616, or, use our convenient Contact Us web page.